I love the Dutch, that's why I came to Denmark... (short excerpt from comedy play by Oren Shafir)

In this short excerpt from my play, Better Off Dead, Ulla and her friends,  Lars and Lone, are trying to teach Rex, your average Texan cowboy, how to be Danish.
ACT I, SCENE III, ULLA’S LIVING ROOM


(Lars and Lone are just entering)


These are my dearest friends, Lars and Lone Lonelarsen. Lars and Lone, this is my new boyfriend, Rex from Texas.


Yes, of course. We are Danish.


We are very tolerant and extremely non-judgemental.


But we believe that all Americans are narcissistic, dogmatic hypocrites.


Why I might take offense with that if I knew what any of those words meant.


Now we shall have Danish hygge.


Yes, now we shall have Danish hygge.


Yes, we shall have Danish hygge now.

ULLA
We shall explain.
LARS, LONE AND ULLA
(Lars, Lone and Ulla light
candles frantically as they
sing this song)

Read more or download the full play as a pdf.

Listen to the first act read in a live staged radio reading
Posted by oshafiro at 7:47 PM No comments:

Email ThisBlogThis!Share to TwitterShare to FacebookShare to Pinterest
Labels: Theatre

All for one (350 word freaky flash fiction) by Oren Shafir 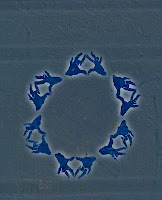 What kind of person could beat a man until his bare knuckles bleed? I know you think I’m horrible, but there’s some things you need to understand.

First of all, it was Frank’s idea. He’s the leader, the thinker, the planner. And he has a way of explaining things with that fancy English accent of his so that it all makes sense. Now that doesn’t mean I will do anything Frank says. No sir, especially not something like that. You need to be motivated for something like that.


You see, that poor kid Jamie is so sweet and innocent, and has been hurt so bad, you just want to protect him. Jamie is the best of us. And it’s like Frank says, if someone hurts one of us, he hurts all of us. So you see, I had to do it. I'm the one who get things done that the others can’t, even terrible things sometimes. I am the doer.
Still when I walked up to that man I did not know what I intended to do. But then he smiled at me like he knew me. Almost like he had been, I don’t know, intimate with me. I could see how he must have hurt Jamie. I thought, Jamie is such an innocent kid, he wouldn’t have seen that; he probably just took it as a friendly smile.


“You don’t know me,” I said, and I swung my whole body connecting a hook to his temple so clean it sent him straight down.
How was I to know that Jamie had been hurt so bad before, that he could get so confused, he might blame this guy for something else someone else did to him a long time ago?


I can’t talk to Jamie (or Frank for that matter) all the time, you know. Usually, one of us just takes over and uses the body, and the others disappear for a while. This time it was me, and I used it to beat that man to death with my bare hands.
END
Read another freaky flash by Oren
Share this post using one of the buttons below

Posted by oshafiro at 8:55 AM No comments:

I’d been trying to remove a painful piece of nut lodged between my upper right molar and the one next to it when I began to suspect the tooth was moving as well. I tested it, and it was loose alright.
I tore off a piece of my rag shirt, the clean one, and dabbed at the area. That’s when I saw the pus and blood. Without thinking, I pushed it as hard as I could ignoring the pain. Back and forth, again and again ,until there was a crack.
I stuffed a piece of the shirt rag in the hole and looked at the tooth.  Tooth? Whatever it now was, I could only admire it. I began laughing. Softly at first, the kind of polite chuckle you would have heard at a dinner party or the library. But my laughter gradually grew - like it was being pumped up inside me.
Soon, it was like the unchecked giggles of a child. Gradually, it became  hysterical. Tears rolled down my beard mixing with gooey blood. Had someone heard me, they wouldn’t have known whether it was laughter or the bellowing of a beast.  Had someone seen me, they would have thought me mad. Would have, if anyone were left, that is.
END﻿

Read more freaky flash fiction by Oren
Share this post using one of the buttons below
Posted by oshafiro at 12:27 PM No comments:

Get 1-min freaky flash stories delivered to your inbox